This year, our team worked diligently and enthusiastically to create our best event yet. Reconstructing Reality, on March 5th, inspired and enticed conversation among all attendees. This year, in addition to creating the event, we set our sights on improving our virtual presence. 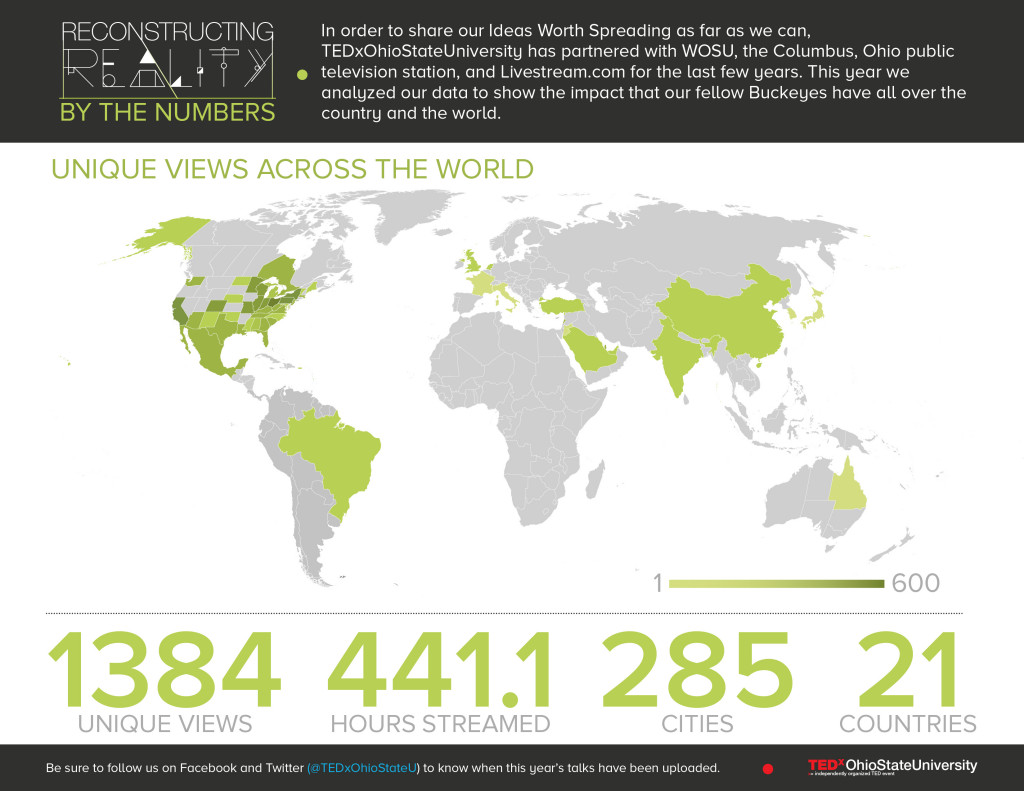 In the spirit of TED, we aimed to share ideas, as well as our event, with as many people as we possibly could. We are proud to say Reconstructing Reality reached over 1,300 viewers tuning in from 21 different countries! Over 285 cities boasted support for our event and allowed our team, our speakers, and our ideas to permeate from the Mershon Auditorium to their homes. Viewers tuned in to watch the talks and performances from international locations: Japan, India, Germany, Turkey, Qatar, Australia, Mexico, and the United States, among others.

All of us at TEDxOhioStateUniversity are thrilled by the reach that our organization has achieved. Many TED talks become famous once they are shared on social media outlets and gain enough views to be featured on TED.com. By utilizing today’s technology, we were able to share our event with over 21 countries. We would love to see other TEDx events taking advantage of live streams in order to include a global audience in their event; the magnitude of inspiration will grow as the audience grows. This would allow more viewers to share the experience of TED events, while also creating a larger network of people who are involved and interested in the power of talks and performances that can change the world. As independent organizers, other TEDx teams can communicate ideas with people in other physical locations. Equally important as sharing ideas between TEDx groups and public populations is the notion that TEDx teams can collaborate with each other and share ideas. Furthermore, this technology can bridge the gaps between TED, TEDx, and TED-Ed.

We are delighted by the response our event has received, especially since we are only in our fifth year. We plan to continue advancing our presence on social media to further cultivate an environment where the Ohio State community can connect with like-minded individuals around the world. In the future, we hope to expand our event by sharing it with more viewers to create more interactions and opportunities for viewers to share ideas with supporters across the globe.

One month has passed since Reconstructing Reality, and the TEDx team has already started to work on next year’…

ONE more day until Reconstructing Reality – get exciTED! Here’s what to expect of the event: from registration, to…